„I will never write any invoice“, Mr. Kollwentz clearly outlines his spheres of interest in the viticultural enterprise.

„And I will never press any grape“, that’s how his wife Grete would explain the Kollwentz interpretation of division of labor, which does, of course, not mean that she only writes invoices.

Beside her active assistance in the vineyard and sale, she has, in fact, been the „soal“ of the winery for decades since her husband Anton took over his parents’ winery in 1965. In the meantime, he has long reached the top of the ladder in the Austrian wine scene and it is surely no accident that Mr. Kollwentz’s image as the „doyen of Burgenland viticulture“ is rather unchallenged.

Meanwhile, also Mr. Kollwentz’s son Andi has joined the club, and the tall and lanky „1969“ – not only an excellent vintage at the Kollwentz estate, by the way – is his father’s equal as regards accuracy, consciousness and ambition. There has never been a generation conflict as happens quite frequently in winegrowers’ families. From the very beginning son Andi was allowed to put into action everything he had learned during his excellent training in the wide wine world.

Father and son respect each other and work together intensively. Should there be any difference of opinion, though, a Solomonic solution is sought such as in the case of the fabulous ‘97 Chardonnay „Tatschler“. Son Andi prefers less strongly toasted barriques, whereas his father loves stronger toasting; thus, half of the wine is each aged in two differently toasted barrels and blended in the end – a compromise each one can easily live with. Anyway, whether barrique or not barrique, this question in respect of red wines belongs to the past.

„Practically all of the reds will go into barriques, what differs is the period of time and the age of the barrels“, explains Andi. Even sweet wines will see small oak barrels – in the right doses; and beside the Chardonnay from ried Tatschler, which is fermented in barriques, the following was worked out for the extremely powerful ‘97 Sauvignon Blanc.

Exactly eight percent of the total quantity had been tenderly „kissed“ by the wood before being „remarried“ with the remaining quantity. The year 1997 was an overall successful vintage for the people from Römerhof. There’s just one thing that didn’t materialize: Barbara, Andi’s second daughter, was not born until January 2, 1998, ignoring the fact that such terrific „year of birth wines“ had already been waiting for her. 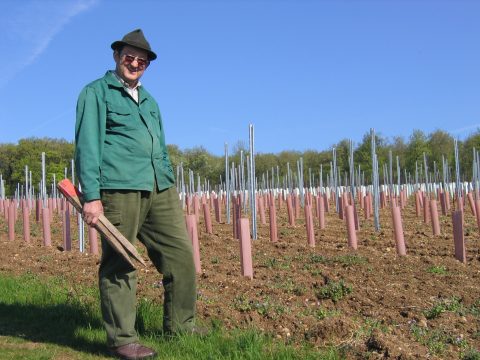