If I must, all the way to the Arlberg…

His ‘wine exports’ to the west of Austria began with ‘pilgrimages’ as far as to the Arlberg, and the first wine that he matured in a barrique, he declared tax-free for ‘export’… But today, Anton Kollwentz is one of the most renowned and most successful winegrowers in Austria.

The workload must be divided. ‘I never write up an invoice’, says Anton Kollwentz, clearly defining his theatre of operations at the wine estate. ‘And I don’t crush any grapes’, adds his wife Grete – which doesn’t mean, however, that her activity at the estate is limited to writing invoices… Because in addition to her steady participation in vineyard work and in sales, for decades now she has also been her husband’s ‘coach’ and his travelling companion on many journeys, travels which he initially undertook to sell wine, and then later to study it. Because Kollwentz has always been curious and open to new experiences, and shortly after he took over the family business in 1965, it became clear to him that he would not get too far on what he had learned in school alone.

Even then there was a bit of ambition about him. Today one can likely say unchallenged that he has been successful at it, and it’s no accident that he is the current president of the elite growers’ association Renommierte Weingüter Burgenland (Renowned Estates of Burgenland). People pay attention when he responds to questions concerning wine production – this doesn’t happen by chance; for three and a half decades he has built his expertise and his success stone by stone. Now the house – and not only the house, but above all the cellar and the vineyards – is in the best of shape, whereby Anton Kollwentz’s son Andi has played a very important part. This tall fellow, born in 1969 – an excellent vintage, by the way – in no way lags behind his father in matters of precision, diligence and ambition, and when the two of them discuss technical matters pertaining to wine production, it can easily happen even to laymen in the know that they lose the thread and think to themselves, ‘Where exactly are they going with this…?’

There has never been a conflict between the generations here. Andi received the best possible education and training, which led him to a number of French wine estates after attending viticultural college at Klosterneuburg – and his father Anton made it possible from the beginning for Andi to put into practice things that he had learned in the wide world of wine. Father and son respect each other and their individual capabilities, and they work intensively together; naturally they both know what they want, and so it can occur that opinions differ. On those occasions, Solomonic solutions must be found, like in the case of the magnificent 1997 Chardonnay from the Ried Tatschler. The son preferred lighter toasting on the barriques, while the father preferred heavier toasting… So the wine underwent élevage partly one way and partly the other way – ultimately blended together, a compromise with which everyone was content.

The two men make no compromises – and here they are one hundred per cent in agreement – where quality is concerned. This begins in the vineyard, where despite the rather substantial (by local standards) 14 hectares under vines, nobody is reluctant to execute the necessary labour in order to take the best possible care of the vineyards: from pruning to cultivation of the soil to – truly and honestly – yield reduction, which has its unforgiving influence (negative as well as positive) upon the quality of the wines. But if one considers the Kollwentz vineyards to be immaculate examples, then one must say that their cellar – or better said, cellars, are works of the jeweller’s art at the very least.

As a matter of fact, anybody who wished to see the loveliest barriques in the world should go directly to Grosshöflein. The red wine-daubed middle stripe between the innermost bands on the casks is so evenly drawn, it’s as if an academic artist had painted it, and not a drop of red otherwise spoils the bright wood of the French barriques. They stand to attention in rank and file, as if aligned with a plumb bob, and the entire red wine cellar seems – as does the white wine cellar and the air-conditioned vinotheque with its multitude of old bottles and large bottles – like it has been scrubbed with a toothbrush.

And of course the same degree of love and care is given to the wine, which – coupled with the necessary knowledge and skill – has led to the Kollwentz Estate being numbered among the very few in Austria that are considered among the absolute finest in matters of white wine, red wine and sweet wine.

Among the finest in Austria, which really didn’t yet exist as a group when Toni Kollwentz was growing up and would be sent to the cellar with the basket to fetch wine for his father and uncle. ‘They all tasted equally sour to me,’ he remembers today with mixed feelings from his initial attempts at wine tasting. Nevertheless he was the one who took over wine production at the family’s mixed-farming estate after the death of his father, and from that moment forward focussed his entire ambition ‘on making something out of it…’

As early as 1963 he produced the first Ausbruch made outside of the city of Rust, which was then considered nearly impossible. This was followed in 1966 by the first Trockenbeerenauslese – and then 1969 was the great year for sweet wines. His father died suddenly on the 22nd of September, so nothing was done in the vineyards for a few days, after which there was nothing but the noble rot Botrytis cinerea hanging on the vines. Suddenly he was sitting on the massive quantity of 7000 litres of Trockenbeerenauslesen, and was obliged to look for new sales opportunities. So Kollwentz and his wife got on the road headed west with many wines in their luggage. ‘I’ll go all the way to the Arlberg, if I have to…’ says Kollwentz, recalling the mood as they set out. ‘I had read something in an illustrated magazine at the barber shop about the culinary delights of the Arlberg, but otherwise I knew of hardly any inns or taverns where wine was sold by the bottle,’ says Kollwentz with a grin – Kollwentz whose wines are on every important wine list in every top restaurant between Lake Constance and Lake Neusiedl.

The pilgrimage of the small-estate winemakers from Burgenland out to conquer the west proved to be a painstaking process, but nevertheless met with success. With the Alpenhotel Saalbach – by the way, still a client of the estate – Kollwentz found their first customer in the restaurant business, and in fact, Anton and Grete Kollwentz did make it all the way to the Arlberg.

The first prospective client they could convince of the quality of their wines was Gebhart Schneider at the Almhof Schneider in Lech; next year followed Franz Moosbrugger from the Hotel Post. And along with the wines from Kollwentz, there were wines from Josef Jamek, Franz Prager and Erich Salomon in the top Austrian restaurants then, but for a long time nobody was talking about an actual Austrian wine ‘culture’. Honestly, Gebhard Schneider was afraid that his guests would find the name Kollwentz difficult to pronounce… So a sort of a surname was added, and because the stones from which the vaulted cellar in Grosshöflein was built came from the ancient Roman quarry in Sankt Margarethen, the estate became the Römerhof. This name appears still today on the labels – albeit in small print, because since then, all winelovers have learned how to pronounce the name Kollwentz – and to appreciate it as well.

But sales of wine alone did not exhaust the possibilities of travel for Toni Kollwentz. More and more frequently his travels served the cause of continuing education; he paid visits to colleagues in other countries, eagerly soaking up practical knowledge. Reading periodicals and books concerned with winemaking in France, he ultimately became convinced that the new small oak casks known as ‘barriques’ were something he wanted to try out. So in 1984 he bought a barrique, filled it with Cabernet Sauvignon and waited to see… After two and three weeks the wine had taken on an intense oaky tone, and Kollwentz drew the conclusion: ‘it’s ruined!’ However, he never gave up hope entirely, kept on tasting and tasting the wine – ultimately with the top restaurateur Günter Winter from ‘Hauswirth’ in Vienna. When Herr Winter asked to buy the entire cask, it dawned on Kollwentz that the wine was perhaps not so bad after all…

For Anton and Andi Kollwentz, the question of barriques certainly belongs – so far as red wine is concerned – to the past. ‘Almost all red wines go into barrique; the only differences are the age of the barrique and for how long,’ explains Andi. Even their sweet wines see – in appropriate measure – the little oaken cask, and alongside the Chardonnay from Ried Tatschler, which is fermented in barrique, in the 1997 vintage they considered barriques for their extremely powerful Sauvignon Blanc. Exactly eight per cent of the total volume received the delicate ‘kiss’ of the wood, before being ‘married’ with the rest.

Altogether the 1997 vintage smiled upon the folks from the Römerhof. After not producing their top red cuvée Steinzeiler in ‘96 thanks to inadequate ripeness, fortune did indeed favour the bold in 1997 with satisfying quantities of absolute top quality, in the white wines as well as the reds – even Eiswein and the Trockenbeerenauslesen are showing beautifully in cask. Only one thing didn’t work out: Barbara, Andi’s second daughter, took her time about being born and did not arrive until the 2nd of January 1998 – despite the fact that there were such marvellous birth-year wines waiting for her. So for the winegrower it poses another challenge: ‘This means we’ve got to step on the gas in 1998!’ 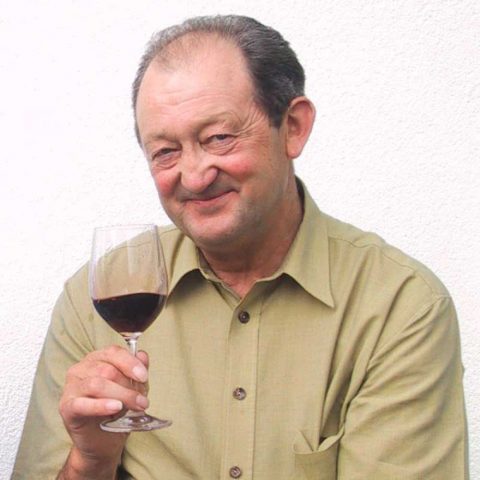